Bunnco - Your Man on the Spot has just returned from a skiing lesson on the Norwich Dry Ski Slope. What should have been an easy glide down the slopes was been punctuated by twists and turns and the odd crash. Rather like the South West Norfolk selection saga... and as bunnco reports, it's not just from the local Tories that we're getting mixed messages. 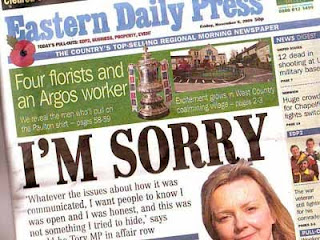 EDP Political Correspondent Shaun Lowthorpe's been having fun at the Norfolk Tories expense all week. He's been highlighting the issue of Twin-Hatters expenses whereby some local councillors, who sit on both the district and county councils and assorted quangos, have been revealed to be earning as much as £40,000 per year. The issue became inflamed when the Tory County Council refused to allow its scrutiny committee to examine the issue in public refusing to debate a paper raised by a local resident. Lowthorpe took up the case on his behalf.

Then he revealed that two councils South Norfolk and Breckland councils were in secret talks to join-up services characterising the move as 'behind closed doors merger talks'. He's been on quite a roll. And that’s without the continuing side-show in South West Norfolk.

Whilst Lowthorpe’s been focusing on the Council stories, the EDP's London Lobby Correspondent, Chris Fisher has been chronicling the Truss affair almost drooling over Norfolk’s new notoriety. The EDP is the country’s largest selling regional paper and sales are through the roof as the public laps-up each fresh revelation.

Yesterday's EDP features a front-page article from Lowthorpe following an exclusive interview with Truss under the headline "I'm Sorry".

In gushing prose, Truss opens her heart to Lowthorpe explaining that she'd been open with the party about her previous peccadilloes and declaring that "I'm a fighter with staying power and character." Without laying a glove on her, Lowthorpe concludes his article with the words "If she can survive the next week and a bit, then it strikes me she can get through anything, and my sense is that people will warm to her for doing so. I've seen enough to believe she deserves the chance to be an MP. But what I really wonder is: do the Tories in South West Norfolk deserve her?"

Shortly after reading the article, one of the seat's candidates called me and, in a brief exchange, I explained that I thought it was all over. If Truss could get past Lowthorpe's gimlet eye when all other Tories in the county had felt the sharp nib of his pen that week, then she was really unstoppable. Truss 1. Turnip Taliban 0. Game Over.

Truss, Lowthorpe reported, had moved upto Swaffham with her family and was now assiduously courting local members in advance of the re/deselection meeting a week on Monday. It was just a matter of time before the issue went away and the media circus decamped to somewhere else. Glasgow North East, perhaps.

But I'm not sure her walk around Swaffham market place this morning has been quite as she might have hoped because the today the EDP front-page baton passes to London-based Chris Fisher with a headline that reignites the issue once more.

In 144-point type, "Deceit of Would-be MP" screams from the front page as toe-curling revelations about her failed 2005 election campaign in Yorkshire's Calder Valley are regurgitated for the masses. 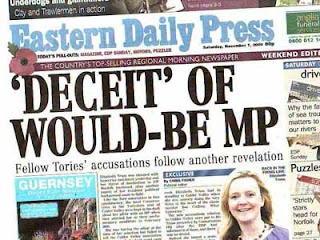 Inside, Fisher reveals that she kept quiet about her 2005 affair with Mark Field whilst winning the Tory selection that Yorkshire constituency. Given that the incumbent candidate Sue Catling had been de-selected because of allegations of an affair with an Association Member, local activists were initially confused and then furious when their new candidate then proceeded to bring Mark Field MP along with her to canvass each weekend and it was revealed that, having deselected one adulteress, they'd fallen for another! With the 2005 election fast-approaching, locals were reported to have gritted their teeth and were doubtless relieved when Christine McAfferty retook the seat for Labour, although Truss cut the majority to just 1367. As Paul Rogan from Calder Valley tells the EDP today "After all our trouble with Sue Catling we wanted someone without reproach in their political and private life." Quite.

Tellingly, EDP enquiries of CCHQ revealed no denials of the revelations and the paper wonders quite how Cameron and the Party machine can continue backing her. One local councillor is reported to have said she “has the cheek of old Nick”. Local refuseniks are now emboldened regardless of the carpeting given by Eric Pickles to the local Association on Wednesday.

It's been suggested that the South West Norfolk's treatment of Truss is somehow upsetting women. That might be the case nationally but on the ground here in Norfolk, those of the fairer sex close to the situation are now truly hardening their hearts against her, whereas the males seem to melt as she fixes them with her gaze. And if the hardened Lowthorpe melts, she really must have something about her.

It's really too close to call. But with Lowthorpe and Fisher taking seemingly opposing views on the front pages of the EDP, first backing her, then plunging the knife, no wonder that there is no consensus in the constituency despite the derision expressed by [male] bloggers against the locals on the interweb.

Tim Montgomerie's intervention on her behalf has been like the Guardian emailing Iowans to back Al Gore in the 2004 US Elections. Whoops.

But as Bunnco – your man on the spot, my view is that this is increasingly seen as a problem, not in Norfolk, but caused by some ham-fisted interference in London. Someone down in the smoke was less than frank with the local association. Today’s revelations suggest that there was central subterfuge and that the local association, and in fairness, Truss have been caught in the resultant cross fire.

Last week bunnco referred to the regional Party Bigwig who vetoed the Open Primary compromise, which could have snuffed-out the flames before they took hold. Last week that bigwig Sir Graham Bright stepped down at the end of his term as the Region's Top Tory to be replaced by a Norfolk woman, Tiz Baskerville. To Kremlinologists, these things matter.

With the national perspective on this issue lazily framed in terms of male vs female candidate selection, that's not how it's seen here in Norfolk. Whilst it's easy to lampoon the locals, the continuing SW Norfolk saga is a proxy war for those want to limit central control in the party.

And Truss is a pawn in that proxy war. It’s a bit unfair on her that CCHQ was somewhat economical with the truth and the local association simply took official assurances at face-value rather than perform its own due-diligence. But today’s revelations illustrate a pattern that can't be ignored. It’s a game-changer. Truss 1. Turnip Taliban 1.

Like today’s televised FA Cup first round clash between Norwich City and lower-league minnows Paulton Rovers, will there be an upset with the underdog beating the favourite? Who knows, but in South West Norfolk we’re all going into extra time.

Bunnco how do you explain the stupidity of people that did not check on her in the 2 weeks before the selection meeting?

People that did not do that have no right to complain. They just draw attention to their stupidity each time they open their mouth to the media.

I tried to cover those questions in my initial comment last week.
http://politicalbetting.blogspot.com/2009/11/all-trussed-up-and-nowhere-to-go.html
As you'll see there, local members did not have the opportunity to Google in advance and that's why the party is in such a muddle now.

The fact of the matter is that there were plenty of rumours in the local press and on ConHome who the list might be but then two things happened. First the list was whittled-down from seven to six by the executive and then, when David Rutley was selected for Macclesfield, a final substitute Anthony Brenton was introduced at the last minute.

The rumoured list was chopping and changing with candidates appearing and disappearing all the time. Nobody got to see the final definitive list until they were in the selection room.

So no chance to Google a complete list in advance.

I think Liz is caught in the middle of a bad selection procedure.

It is time for the National Party to announce that from now on all future selections will be by done by an open primary system.

It is certanily time to put an end to the current seceret system.

Liz does not deserve this treatment and I do hope that she wins the selection.

"Like today’s televised FA Cup first round clash between Norwich City and lower-league minnows Paulton Rovers, will there be an upset with the underdog beating the favourite?"

Didn't you see the posts that pointed out that Liz Truss was announced as a candidate in the EDP a fortnight before the she was selected as PPC? The Turnip Taliban may not be good with the Interwebby Thingy, but they had enough time to read their local paper and even make a trip to the nearest copyright library (Cambridge University) and read all the back copies of the papers.