The best server for the main site

Over the past week we've introduced a new server on the main site. If you have problems getting through please link to this
http://www2.politicalbetting.com/
Going to the old URL should point you here but this is not happening in every case - so bookmark the above.
Posted by Mike Smithson at 05:42 No comments: 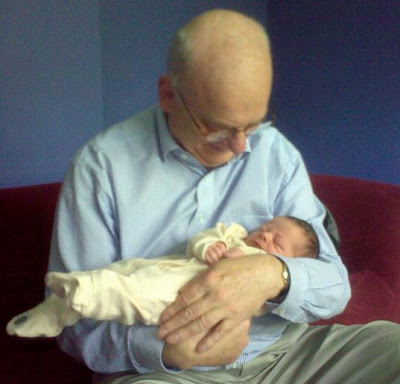 Today has been dominated by the birth of my new grandson, as yet unnanmed, to my elder daughter, Cayt and her husband Colin. It is their second child.
These things make you feel very proud and emotional so I thought I'd put up a picture.

Doesn't this picture say it all?

Is Gord capable of inspiring his party and the nation?
This is picture that was first featured here at the end of 2006 several months before Brown became prime minister. There he is, amongst enthusiastic Labour supporters and you would expect him to at least make the effort to show that he is delighted to see them.
But look at him - he is rigid and cold as a cucumber. He's hardly an inspiration to even the most ardent enthusiast.

Although you can get trained to deal with the technical points of communication the ability to make a compelling case is something that you either have or don't have. Brown's in the latter category.
Will he survive tonight? Probably. What will be the consequence? The wounded leader will drift on, there'll be more YouTube and Alan Sugar-type gimmicks and the probability of a Labour melt-down at the general election will become even greater.
To me it's blindingly obvious that with Brown Labour is dead - only the demise will be prolonged. Without him the party stands a fighting chance of impeding the Cameron band-wagon.
(This post has been posted here as well as the main site because of the problems some people have had in getting through)
Posted by Mike Smithson at 13:13 24 comments: 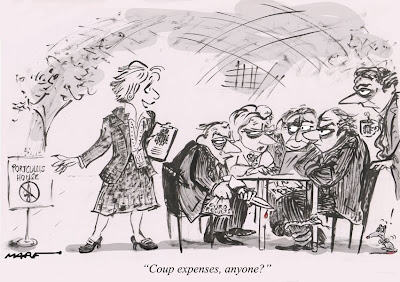 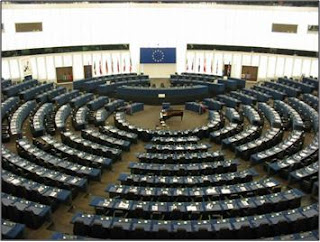 This will be the thread for the Euros results outside the UK.

A couple of useful links:

The Netherlands voted on Thursday and detailed results are available here, with Geert Wilders' PVV finishing second with 17% of the vote.

I'll be aiming to keep track of the following countries: Austria, Denmark, France, Germany, Greece, Ireland, Italy, Poland, Spain, Sweden, UK - but please post results and links from countries not in this list, and I'll try to look at the Czech Republic and Hungary too if possible.
Double Carpet
Posted by Double Carpet at 13:30 21 comments:

Getting onto the main site

For some reason many are having a problem getting through to the main site. Instead of the latest page you get a cached page from April. To get round this please use this URL
http://87.106.214.196/
If it doesn't work first time then try again.
Many thanks
Posted by Mike Smithson at 10:25 32 comments:

But the TV "experts" project a Tory majority of just 4
A big gap has opened up this afternoon between the punters - those who back up their general election predictions with hard cash - and the TV academics who have been analysing the local election results.

So while SkyNews has been projecting, based on the handful of results in so far, a Conservative general election total 327 seats the Sporting Index spreads above have moved to 360 - 365, which is almost certainly the highest level since spread-betting of this kind started in the UK.

There's also been further movement in the Lib Dem spreads as gamblers see the greater potential for them following the decline of Labour.

So the SkyNews is talking about a Tory majority of just four seats - the mid-point betting prices suggest an overall majority of 75 seats.


I have to say that I simply do not get the SkyNew calculation given the drubbing that Labour has been getting up and down the country. And in any case local results, with the one exception on 1997, have been a pretty poor predictor of general election outcomes.

My sense is that the SPIN spreads, which are in response to market pressure (these things are not just invented by the bookies) are probably just on the high side - but that is all.

Clearly the local results have been affected by the concurrent Euro elections which have boosted the shares of the smaller parties - something that is much less likely to happen in a general election campaign.

Not sure if the main site will be able to handle the traffic, even with comments limited to 50 per page, so the discussion can continue here if necessary.

Gordon Brown's premiership is now in its death throes. This is the end.

"Me" has left the full text of his letter in the comments - here reproduced:

We both love the Labour Party.

I have worked for it for twenty years and you for far longer. We know we owe it everything and it owes us nothing.

I owe it to our Party to say what I believe no matter how hard that may. I now believe your continued leadership makes a Conservative victory more not less likely

That would be disastrous for our country. This moment calls for stronger regulation, an active state, better public services, an open democracy.

It calls for a government that measures itself by how it treats the poorest in society. Those are our values, not David Cameron's.

We therefore owe it to our country to give it a real choice. We need to show that we are prepared to fight to be a credible government and have the courage to offer an alternative future.

I am therefore calling on you to stand aside to give our Party a fighting chance of winning. And as such I am resigning from Government.

The Party was here long before us, and we want it to be here long after we have gone. We must do the right thing by it.

I am not seeking the leadership, nor acting with anyone else. My actions are my own considered view, nothing more.

If the consensus is that you should continue, then I will support the government loyally from the backbenches. But I do believe that this question now needs to be put.

Thank you for giving me the privilege of serving.