It's time for the Pre-Budget Report

I have never known a budget or a PBR where so many of the key details were leaked in advance. Already, the papers are full of the news that VAT will be temporarily cut from 17.5% to 15%, and that the top rate of Income Tax will rise to 45% on earnings beyond £150,000 per annum.

I cannot believe that the return of Campbell and Mandelson would allow for these to be leaked accidentally, and so I wonder whether they were merely sending out trial-balloons for the media reaction, or whether there is a greater surprise awaiting us when Mr Darling takes to the Dispatch Box at 15:30 GMT.

A picture from the US election night "betting floor" 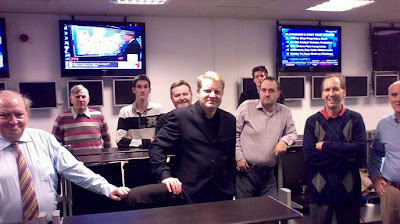 On US election night I meant to put this picture from the "betting floor" at SportsTraders near Kings Cross in London of some of those who got together for our overnight session together. Alas the shot only includes those who arrived first and I forgot to put it up because of the excitement of the elecxtion itself.

From left to right we have Peter from Putney, David Kendrick, ??, Morus (head only), Paul Maggs, Martin Coxall, Harry McAdam (right at the back and the person who fixed the event) Patrick Rock and half of Peter the Punter.

For me the "stars" of the evening were Nick Palmer MP (not pictured) and Paul Maggs who were both finding and getting data way ahead of the US networks. It was Nick who focused on the voting numbers from "bellweather" county in Indiana very early on that gave us a clear steer as to what was happening.

This was a great way to spend an historic night - thanks again to Harry and Morus who put the thing together.
Posted by Mike Smithson at 17:40 1 comment:

The BBC is reporting that the SNP have halved Labour's majority in Glenrothes, but that still means that the Government has held the constiteuncy with a majority of about 5,000.

Any and all news welcome.

Welcome to the War Room

Greetings from the Trading Floor in North London!!

We are happily ensconsed at a trading floor in Islington: the most eager punters on PoliticalBetting.com scouring the interweb for details of value and dismissing exit polls with hardened skepticism.

This is where you should be if the main site goes down temporarily - DO NOT KEEP PRESSING REFRESH ON THE MAIN SITE WHEN IT IS DOWN - we'll let you know when it is back up and running.

This is only the beginning - have a great night all!

Just this once, might Our Genial Host be wrong?

Only a madman and a fool bets against Mike Smithson. I should know - I've been burned a couple of times, daring to vote against his advice.

My worst political gamble of the year was Crewe and Nantwich - I thought Labour would hold (this was before Tamsin Dunwoody was announced), and I lost £40 to Peter from Putney, Peter the Punter, David Herdson, and Double Carpet on the back of it. Mike won a holiday.

By-elections not being my specialty, I was skeptical that Labour would actually lose their deposit at Henley. Mike insisted that this was one of the surest things he had bet on this year, and his money was heavily where his mouth was, taking good odds on Labour not reaching 5%. They came fifth, and lost their deposit - I didn't lose money, but I learnt a lesson. Mike won enought to go on holiday again.

So, two cosmic laws we know to be true - Morus shouldn't be allowed to bet independently on by-elections (I've followed Mike's advice on Glasgow East and Glenrothes), and Mike Smithson rarely makes the wrong call on a binary question.

But the impetuousness of youth gives me hope that I might win one bet against Mike this time around - the US Presidential race turnout market. Shadsy at Ladbrokes was (I believe) offering 5/6 on above 60%, and 5/6 on below 60% when the market opened. My money has always been on this being a high-turnout year, but I am adamant that turnout in the US will not reach 60%. Mike Smithson, to my horror, is fairly confident that it will.

The reason I am not yet as fearful as I should be is that the market is based, not on the proportion of Registered Voters who turn-out to vote, but on the percentage of the Voting Age Population. If only 80% of the VAP register to vote, then turnout amongst registered voters would have to exceed 75% for the 60% of VAP threshold to be met. This might seem a perverse way of calculating, but it is well-recognised against firm, federally-agreed data (the constitutionally mandated decennial census ensure's that such mechanisms are in place), whereas the number of registered voters (who either did or didn't vote) is only held at a state level, and with less scrutiny. It is more common, and less arguable, to settle disputes using VAP than the slightly less centralised '% registered voters' measure.

Turnout last crossed the 60% mark in 1968, when Richard Nixon finally won the Presidency against Hubert Humphrey. It had reached 63% in 1960 when nixon lost to a young Jack Kennedy. Even 2004's record number (absolute number that is) of voters for each candidate didn't cross the 60% rubicon, and I remain skeptical that a race that no longer seems tight will actually energise enough *Republicans* to see record turnout yet again.

I have never seen a GOTV operation as slick as Obama's, and the enthusiasm and fundraising are testament to one of the best campaigns perhaps ever waged. We might well see a record number of absolute voters, certainly for a Democratic candidate. but a big part of GW Bush's re-election was on the back of the millions of Rovian footsoldiers from the churches and community centres of the Bible Belt. I would be surprised if they turned-out in equal or greater numbers for John McCain, or even for Sarah Palin on the bottom of the ticket.

So in spite of the adamant cosmic law, I still have faith that I might not lose this one. It's not a UK by-election, which at least means I'm playing on more familiar turf, but that was what I thought about the Democratic VP market too. If I lose this one, you can be sure that I will never again, as long as I live, bet against Mike Smithson. 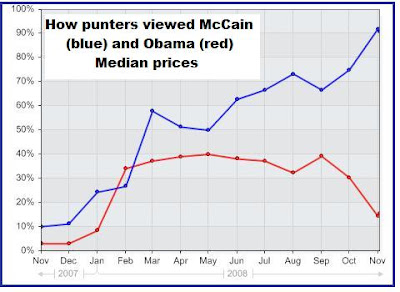 Posted by Mike Smithson at 05:49 No comments: