The main site is back - PARTIALLY

Alas I'm unable to get into the admin area and new posts until this is resolved will be on here.

It was all my fault. I was planning to reduce the number of comments per page for Martin's statement so we could deal with an expected spike in traffic. Thus I could have boosted our capacity by four-fold if the standard number of comments had been reduced from 250 to 50. Alas I got distracted and failed to do it in time.

Labour only 11 points behind with ICM

CON  39 (-1): LAB  28 (-2): LD 20 (+1)
The May survey by ICM for the Guardian is just out and the big surprise is that unlike other recent surveys from other pollsters there total for others has only gone up by one percent.
This is almost certainly due to the fact that ICM's voting intention question is different from the other firms and talks specifically of what might happen in the area where polling respondents actually live.
What is interesting is that there does not seem to have been an EU election effect nor has there been much damage from the MP expenses exposes.
The Tories might be a tad nervous that that the gap over Labour is only just above the point where they can be sure of a majority. But the papers note:

"More than two-thirds of those surveyed, 69%, say the prime minister has handled the controversy badly, including half of all Labour voters. But 55% of voters credit the Conservative leader with handling it well. Opinion on Nick Clegg, the Liberal Democrat leader, is evenly split: 37% say he has handled it well and 39% badly."

I'm expecting the Ipsos-MORI poll for May tomorrow.
Posted by Mike Smithson at 18:56 124 comments:

Will Brown let the Martin confidence motion be debated? 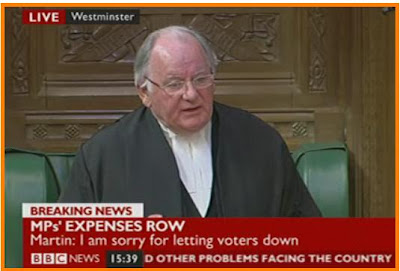 Or will Gord block it making it even worse for himself?
Well there we are. Martin's made his statement and PB's main site goes down because there's so much traffic.
We now have to wait until we see what happens to the no confidence motion. Will Brown let it be debated? What's Cameron going to do now?
I think that James Forsyth at the Spectator CoffeeHouse has got this one right. The Tory leader might be reticent to join Nick Clegg in calling from Martin to go but he could demand that the government makes time available for the cofidence debate.
That would really put Brown on the spot and make him move from his current position of neutrality.
The big winner this afternoon, I guess, is Ladbrokes. Their "Speaker going" market was linked to a departure by the end of the month. I got on with PaddyPower where it's open until the end of the year.
Posted by Mike Smithson at 16:43 110 comments:

What about the voting on Eurovision night? 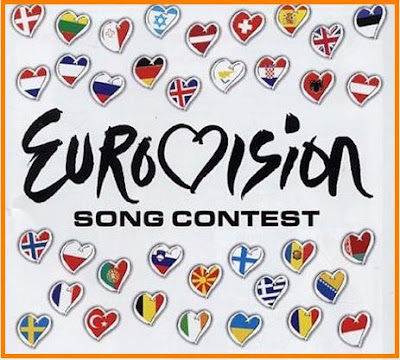 May 16th will see BBC1 air the annual Eurovision Song Contest, and with a number of betting markets available, it could provide an interesting little challenge for the readers of Political Betting. It's not just a single event, but two weeks of rehearsals, practice and news coming out of the Olympic Stadium in Moscow, along with three live concerts broadcast around the world... all that provides lots of impact on the markets.

Eurovision has two semi-finals (May 12th and May 14th) as well as the Grand Final on Saturday May 16th. Betfair is offering markets in each concert, with a winners market, top three finishers (in the semi final, top four in the final) and placing in the top ten of the final, and the ten countries to qualify from each semi final. Ladbrokes have a winning entry market, offering a top 4 (each way) option on the final results only.

The two semi finals have 18 and 19 countries respectively (Georgia withdraw at a late stage for political reasons). After all the songs are performed,a phone vote of the countries in that semi-final, plus the United Kingdom and Germany in the first semi final, and Russia, Spain and France in the second semi-final, will take place. The top nine countries in each vote will qualify. In addition to this, a jury vote also takes place, and the highest country in the jury vote that has not yet qualified takes the tenth place in the Grand Final.

The public vote and jury selection are not revealed until after the contest is over on Saturday night.

This year sees a big change in the voting in the final. In a bid to head of the political block voting (neighbouring countries sharing musical tastes and thus sharing votes) and disapora voting (immigrants voting for their home country), a jury of music industry professionals will vote in each country and make up 50% of the final weighting. After the phone votes close, those votes are ranked and the countries are awarded the traditional 12, 10 , 8, 7, 6, 5, 4, 3, 2 or 1 points. The jury rankings then also score the 12, 10 , 8-1 points and the two are added together. This gives the overall score and decides who gets the announced Douze Points and so forth that is read out. Tie breakers will give precedence to the public vote.

Once the performers gather in Moscow, the rehearsals start on Monday 4th May and the markets will start to change as information comes out of the Olympic Stadium. As well as watching the main Eurovision site (www.eurovision.tv) two fan sites are also worth bookmarking for up to date information, namely Eurovision Today (www.esctoday.com) and The Eurovision Blog (eurovisionblog.wordpress.com) to help you get ahead. There are also countless opinion polls on fan sites, all of which can help you gain information and a feel for the market. (and I'll be doing online video reports from May 9th once I arrive in Moscow, www.ewanspence.com/blog).

In Western Europe there is a disconnect between songs that are popular with the fans, and the actual results, and it's in this gap that savvy punters will be able to find value. Last year the fan boards were convinced that Sweden, on the strength of the song, was on to a high scoring place. In fact the performance bombed both in the semi-final and final with the voting public. The fans are not always right.

While there are a number of markets on Betfair, and Ladbrokes are running a winners market (with each way option for the top 4 places), most of the cash (currently £310,000 on Betfair) is sitting in the “to win” market, and I'd recommend playing there, especially while the semi-finals are on air. As songs come and go, there will be movement in all directions.

This year's favourite is Norway, with 15 year old Alexander Rybeck. Being born in Belarus, and a song unashamedly appealing to Eastern Europe, it has a lot of cross border appeal and performed exceptionally well in the Norwegian selection final, although it is rare for a favourite in Eurovision to actually win.

My value bet would be Hadise's Dum-Tek-Tek from Turkey. It might seem reminiscent of previous Turkish winners, but it's a female vocalist, with a hint of ethnic rhythm and Beyonce which should do very well. There's strong support also for Sakis Rova's Greek entry, but while he may be returning to the Eurovision stage I don't see this song performing particularly well in the Grand final, even with, but it's sure to get out of the first semi-final.

What to make of the British entry, Jade Ewen? It's certainly not winning any good publicity in the UK, but seeing as we're not allowed to vote for it, that doesn't matter. With Andrew Lloyd Webber confirmed as appearing on stage during the live performance, the song is sure to impress the juries, which have 50% of the voting in each country this year. And while we might bemoan the repetitive lyrics, the majority of people who are listening with English as a second language will clearly get the chorus and help make the song memorable. Jade and Lloyd Webber have been touring Europe promoting the song and insisting on singing live at all the events – and that's gained her a lot of respect. Is it a winning song? I still have my doubts, but a top ten placing is very likely, and an each way / top four finish could prove a wise investment.

While Eurovision is seen as a camp cabaret in the UK by many, it is taken deadly seriously on the continent, and there is money out there for the smart better. With the UK Election markets ticking over (for the moment) this is a great chance to flex your betting muscles and skills in a fast moving market that wraps up and pays out in the middle of May this year – rather than leaving it until maybe June 10th next year!